In part two of three, we make our way from the Isle of Skye to Harris and Lewis Islands and spend a day poking our noses into large stone-based ruins. (We spend the following day lolling in our tent and resting up for part 3, which is the amazing trip to St Kilda.)

We said goodbye to our gracious hosts at The Ferry Inn in Uig on Skye and headed to the ferry terminal after a hearty breakfast. We rode in the observation deck on the 1.75 hour journey to Tarbert on Harris Island, where we were assured it wouldn't be raining.

A light drizzle hit us as we drove off the ferry.

We checked at the tourist office for a good campsite, then at Kilda Cruises to make sure we could still travel there on Thursday. They said yes, as long as I was willing to stay seated during the journey across the open Atlantic. I agreed to the condition.

The rain cleared as we drove north to Lewis (part of the same island as Harris but long separated by an obscure intraclan feud). We saw many stone constructions of unfathomable age: stone circles, kilns, blackhouses & a broch, which was a sort of Iron Age way of saying, 'Go Away, for Our Fort is Bigger Than Yours'. Impressive, yet also functional. Everyone including livestock could shelter from a fierce storm in it. 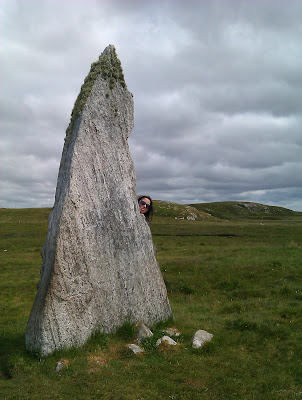 We drove back down to Stornoway on Lewis through uninhabited rocky land. We got ourselves some excellent fish & chips and observed the flags on the pier with amusement. Grouped together: the Scottish, Welsh and Scandanavian flags. On a separate flagpole, and considerably smaller: the Union Jack. (At least it wasn’t on fire.)

Refueled, we headed back to the west coast of Harris to Horgabost, whose white sand beaches we hope to enjoy tomorrow. We tried to put our tent up on the rise you see me standing on here, but the wind was so strong that when we popped up our tent, it turned into a kite - probably to the great amusement of the other campers. We retreated to the little protected dells behind the machair (grass-covered sand dunes) to enjoy the sunset.

Back on Harris Island, the campsite near the village of Horgabost. 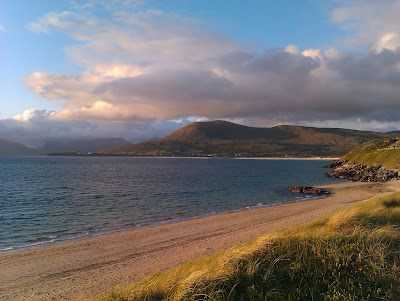