This is part one of three of the Epic Driving Holiday from Cambridge to the Outer Hebrides. We decided to drive and alternate between hotels/B&Bs and car camping, given my current knocked-up condition. The bloke bought me a special inflatable mat, dubbed “The Princess Mat” for our camping nights. It was luxurious indeed, although he didn’t get one for himself and instead insisted on sleeping on foam pads, aka “The Pauper Mat”. There is probably some interesting logic involved in this, whereby it isn’t proper camping unless you’re cold and uncomfortable. I’m perfectly fine with this logic, as long as no one tries to apply it to me.

Day 1
We made it to Scotland! 430 miles from Cambridge to Callander, a sleepy little town with some lovely hikes & one outstanding pub, just outside Stirling.

We stopped at the National Trust property Sizergh Castle for lunch in Lancashire. Very pretty rock gardens and deer park...and some rather terrifying scarecrows. The castle was shut as it's still occupied but we didn't mind as it was just a quick stop to eat, have a walk and break up the journey.

We got to Callander at 4:30, checked in to our hotel - which was probably a grand affair in the 1960s but whose glory has considerably faded since - had a cup of tea and drove to Bracklinn Falls for a 2.5 mile walk. It was to be the only time on the entire trip that we needed our wet weather gear. We felt we’d earned our supper by then, so we consulted the Lonely Planet guide and chose the Lade Inn for a seafood dinner. I had prawns. Francis had mussels. All local food and very good indeed.

We were early to bed so we could have the energy to tackle Ben Nevis. (Not really, given that I have to rely on my walking poles to ascend even a gentle slope.) But it would be nice to walk at least a short length of the West Highland Way, which stretches 96 miles from Milngrave to Fort William.

Day 2
We drove to in Kinlochleven today, our stopping point on the way to Skye. Did a spot of walking in the Mamores in the afternoon, so I’m satisfied to have walked a couple of miles of the West Highland Way. The poor bloke got bitten badly by the midges which is doubly unfair because I'm pregnant, therefore supposedly tastier and also unable to wear DEET. But the views were lovely.

House on the loch, taken from the car, prompting fantasies of retiring to the Scottish countryside. 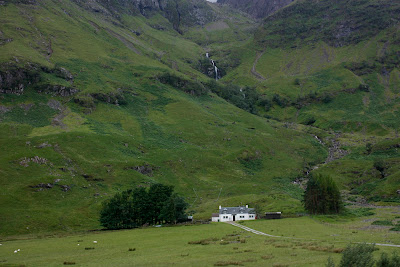 Camping tonight. It was dry, which was a bonus. I had a nap on The Princess Mat earlier after our walk, and it met with approval.

We also splashed out on a really nice dinner at a special seafood place on the loch. They grow their own shellfish in tanks - making them very clean - and fish from the sea (accessible from the loch). We shared the cold seafood platter. The bloke had to eat all the oysters & cockles because they were raw. He assures me it was a terrible sacrifice. Hm. But at least I could have the razor clams, mussels, clams, langostines, lobster & crab, so I didn't feel too hard done by. Passenger seemed to approve of it all too. Supposedly a fetus can start to taste what you're eating around this time so I have to make sure she has a healthy & eclectic palate!

The Place of Feasting. 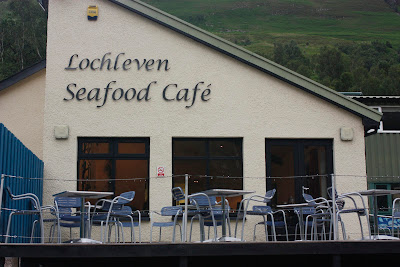 We're off to Skye in the morning so next update comes from there.

Day 3
Today we drove to Skye across Kyle of Lochalsh bridge. On the way, we stopped at a popular Point of View over Loch Garry (which looks like a map of Scotland) and were accosted by a very friendly bagpiper and his daughter. He insisted on playing “Yankee Doodle” on his bagpipe in my honour. The bloke insisted on taking pictures. Ack. 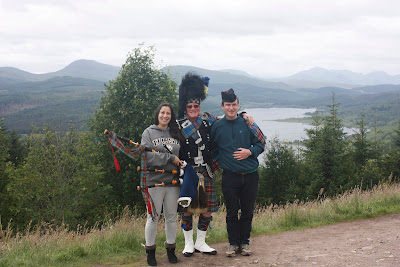 We stopped off in Fort William for coffee & cake and a look around the delightful little museum before heading north. There seems to have been a long history of feuding in the area. Intraclan feuding, inter-clan feuding and, when opportunities presented themselves, feuding with the English. Apparently the Highlanders can really get their teeth into a good grudge.

We passed by stunning views over lochs and the restored Eilean Doran castle which is probably the most photographed castle in Scotland. We didn't go in because our guidebook gave us the impression that it's a tourist trap. But we felt quite lucky that we got to see it on a sunny afternoon. 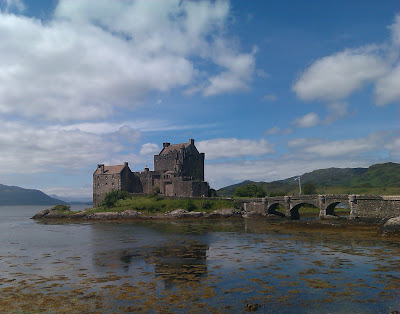 We got to Uig and booked into our hotel for a quick refueling and rest before going for a long walk on the rocky beach. Lots of sea birds - noisy little oystercatchers, herons and small gulls. Saw the ferry come in too. We'll be on it (going to Tarbert on Harris Island) tomorrow morning. V exciting. 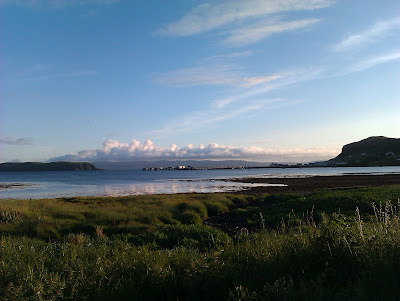