Around these parts, though, we're mostly celebrating Particle Announcement Day at CERN.

Londoners: The Royal Society Summer Exhibition is on again this week. I'll be there this afternoon (1330 to 1700, when it closes to the public) along with

purplecthulhu and tomorrow morning (Thursday, 1000 to 1330) on the Herschel stand. I realise this is work-time for most of you, but the exhibition is open late to the public on Friday and also at the weekend. Come on down to Carlton House Terrace and see the new and exciting things going on in science!

ETA: We're watching the CERN webcast in the lab. It is hilarious watching the dance between the press and the scientists. The press are practically begging for them to say without qualification that this is the Higgs boson. The scientists are steadfastly refusing.

Now that I've been watching for half an hour, I can sum up the interaction thusly.

Press: "Please, please say this is the Higgs. PLEASE."
Scientists: "Here is a technical explanation of the reason why we refuse to define this particle as the standard-model Higgs."
Press: "OK, if you won't do that, will you at least help us with our headlines by saying something about dark matter?"
Scientists: "....No."
repeat ad infinitum

I brought home five sketches done by my maternal grandfather from my visit to my parents. I plan on having them framed when we eventually move to our new house.

The first is a pastel study of a street corner in Brooklyn, NY in 1947, where he and my grandmother lived after the war. I love the old car and the elevated train track, which is actually still there. It's one of the few paintings he signed, dated and labeled - generally he did none of those, making it difficult for us to date and locate his work. 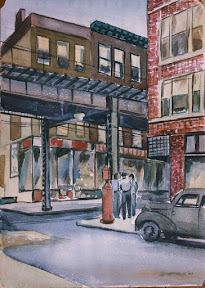 It's labeled "Corner of Hendrix and Fulton" and if you look at Google Streetview, it looks surprising similar now to the way it did then.

My mom thinks this looks like New England. It's much more impressionistic than his usual work, which was quite meticulous, more like the first pastel drawing of the Brooklyn street corner. I think it was done later in his career and that he dashed it off in a few minutes. In the lower right hand corner, you can see that he simply ripped it off his easel without bothering to remove the tape or trim the edges. I'm not sure he thought much of this painting, so I'm surprised it's survived as he had a tendency to burn anything he thought was sub-par. 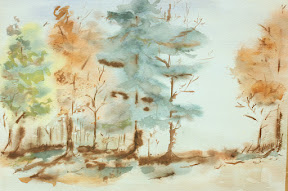 A good deal of his work hangs in my parents' house. He built frames for the ones he liked best. These weren't among his favourites, but they stood out to me when I looked through the portion of his unframed portfolio that passed to my mother.
Collapse