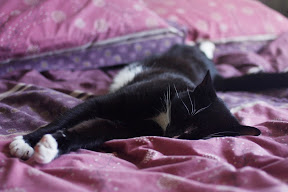 I'm working from home today. This is what I have done so far.

Here is what Telstar has done today.

Someone remind me which of us is the intelligent one, here?

I didn't take many photos during the visit to my parents since I was pretty busy with them for most of the six days I was there, but I did manage to have a walk around downtown Olympia, including Capitol Lake and the waterfront.

Three lovely people made special trips to see me.

victorine drove up from Oregon for an evening.

becala came down from Seattle for a cuppa. And my dear friend Josh flew all the way from San Diego to spend the weekend.

After having tea with

becala and her young gentleman (no photos - the universe will explode if we have too many facetwin pics), Josh and I went for a walk through downtown. I spent my early teens in Olympia and it's been interesting to see it evolve in a series of leaps over the course of my annual visits to my parents. 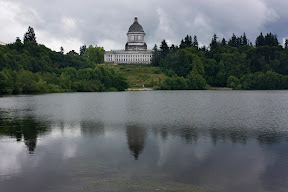 The state capitol building is the same, although the dome has gotten dirtier. The lake, which is man-made and was established pretty much for the sole purpose of setting off the view of the capitol from downtown, now has a very nicely designed walking and cycling path all the way around it.