On my way through immigration this morning, I was unintentionally sarky to a border agent. This could have gotten me into trouble, except that it played exactly into the particularly British class of interaction that somehow makes it the fault of the person on the receiving end of the sarcasm.

The exchange went like this. I walked up to the counter with landing card at the ready and passport and open to the photo page (which, due to an obscure and inconvenient bureaucratic decision, is not on the front page of the newer American passports). I passed them to the border agent. She looked at the landing card, flipped through the first couple of pages of my passport and looked at me oddly.

"Don't you have anything that shows you live in the UK?" she said, with a peculiar combination of derision and plaintive appeal.

I raised an eyebrow. "It's right there," I replied, pointing at the passport. "In the back." I honestly didn't mean to, but upon reflection I was horrified when I remembered my tone of voice clearly implied that she was being thick.

She flipped the pages rapidly and found it, making apologetic noises all the while. "I'm sorry, it's just that some people have separate cards showing residency," she said deferentially.

"Mine is pretty new," I smiled. She wielded her stamp vigorously and handed back my documents, apologising again.

I walked off to baggage claim. It wasn't until I'd gotten halfway there that I realised how fortunate it was that we were in Britain. If I'd spoken like that with a border agent in the US, I'd probably still be there right now.

In conclusion, have a photo of my parents being cute. 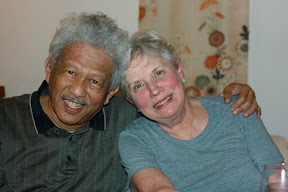