Many of you will have learnt this already, via FB, Twitter, Flickr or maybe even in meatspace. But just in case there’s anyone out there who didn’t know yet: I’m four months pregnant.

I’m dubious about bringing a person into a world struggling with climate change, resource depletion, endemic racism and sexism, and generally the ease with which humans can be horrible to one another. I guess all I can do is try to equip my passenger with the tools to help cope with these things. We’ll start with completing gestation. Oh, and while I’m glad to be having a child, I’m also glad that I was able to exercise control over my reproductive ability until I felt I was in a position to provide adequate support for one. May we one day live in world where every woman has the means to do this.

Here are Telstar’s thoughts on the forthcoming arrival. 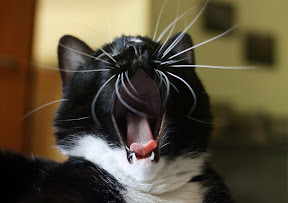 You could interpret this as the cat version of “Congratulations!”, but I think it’s more likely to be, “You mean I can’t eat it? Boooorrrrring.”
Collapse