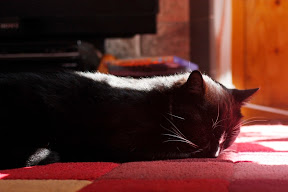 There's no getting around it. Our Telstar is a lonely fluff. He tears around the house, howling mournfully, trying to get into all the rooms and the cupboards and searching futilely under the beds. (Usually at 4 AM.) We're fairly certain he's looking for his brother. Our neighbour has found him several times, sitting on the pavement in front of the house, where he never used to go, looking expectantly over the road.

We try to play with him. He loves his springy fishy toy and wiggled fingers in stairwell bannisters. He loves toes under duvets and bubbles in the bath. But it's not the same and he knows it. He wants the rough-and-tumble followed by napping that he had with Sputnik. He wants tail-swipes from chair perches and tussles for the last scrap of gooshy food.

So we've decided that after we move - which was supposed to be at the start of this month but is looking more like it will be June - we'll get him a new friend. Fortuitously (for us, anyway), one of my workmates has a brother living near our new place. Two weeks ago, he adopted a cat for his five-year-old daughter. The cat was looking a little green when they got her, so they took her to the vet. Three days later, they had five cats. The kittens are still too small to be adopted, but by the time we move they should be nearly big enough. We've asked for a male.

Telstar will probably never be as close to the new cat as he was to Sputnik, but we're hoping that he'll bond with the little one and this will help curb his newly developed eccentric tendencies. (Particularly, looking for his brother in cupboards at 4 AM.) If anyone has tips for introducing cats to one another with a minimum of mutual fur loss, please do post here.

The European Space Agency has selected its first L-class mission, the JUICE mission to Jupiter and its Galilean moons.

Here's a quote from the article (from my boss):

"There are four conditions required for life to form. You need water; you need an energy source - so the ice can become liquid; you need the right chemistry - nitrogen, carbon, hydrogen; and the fourth thing you need is stability - a length of time that allows life to form.

"The great thing about the icy moons in the Jupiter system is that we think those four conditions might exist there; and Juice will tell us if that is the case," she told BBC News.

It's scheduled to launch in 2022. Fingers crossed that I will be working on it then, too!