I lived in north London for a few years after I first moved to the UK, first in Camden and then in Highbury. I visited Highgate (Eastern) Cemetery fairly regularly during that period. Fishing around in my journal archives, I managed to find photos from my first visit in 2004 and some another visit in 2006. My last visit, in May 2009, was the first and only time I’ve been to the Western Cemetery. You have to go on a guided tour to visit this portion of the cemetery and the hours are quite restrictive.

I’m very, very fond of Highgate and I saved it for last because I’d been there before. Every visit reminds me anew why I love it. The entrance has been extensively remodeled since 2004. You now walk in through quite a nice pink little reception hut and pay £3 (it used to be £1 plus £0.50 for a camera) to a volunteer, who offers you a map. The volunteer sits behind a register in front of a tidy display of postcards, mostly featuring Karl Marx’s giant head, which is frankly the most glaringly incongruous grave marker in the cemetery.

When you first enter, you are suddenly struck by the fear that they’ve finally managed to clean up the entire cemetery the way that Kensal Green and West Norwood have been. The few new burials are right by the entrance, along the paved walkway. But then you turn off onto one of the unpaved, muddy paths and you head into the cool green ivy arbours, and you breathe a sigh of relief. Here are the overgrown Victorian graves with their lovely angel statues, handless arms outstretched to the heavens, heads bowed toward the earth. Here are the tree trunks wound in thick coils of ivy vines, providing a backdrop for a row of arched tombstones whose epitaphs have been erased by the elements, leaving only “In Loving Memory Of...”. There is the fox lying in the path, startled by the clicking of your camera shutter.

Maybe it’s obvious from my choice of photographs, but I don’t care much about finding the graves of the notable persons buried in these cemeteries. For me, the attraction of these places comes from the collective obliteration of individual identity. The sense that pain and sorrow have been absorbed and transformed into something that is rather beautiful - the admission, and acceptance, of death. 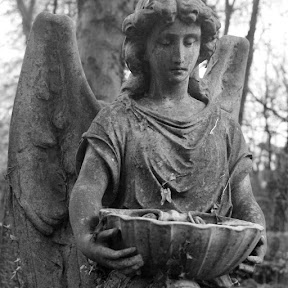