In case anyone failed to notice the ill-contained excitement of their friends in Southern England, we have had snow. Snow falls in significant quantities here perhaps once or twice a year and it isn't usually so obliging as to fall at the weekend, so everyone's gone a little mad about it. We had about 10 cm of it in Cambridge. The bloke & I went for a walk around Coldhams Common. We met many ecstatic children and dogs. And a punk rock snowman. Then we came home and met Telstar, who was thrilled about the snow. Sputnik...not so much, as you will see under the cut. 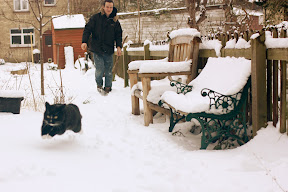 [Hovercat can pass over snow without getting his paws wet and cold.]

Since he possesses the attention span of a cat, Telstar's snowball vigil lasted exactly as long as it took him to work out that we were headed back into the nice toasty warm house.
Collapse