As regularly as possible*, I catch the Festival of the Spoken Nerd along with fellow nerd/appreciators

helpful_mammal. This lovely comedy night is normally held in a pub and attended by under a hundred people. It features maths, experiments and beautiful science songs accompanied by fine ukelele strumming. It is a joyful occasion.

Last week, the three organisers decided to up their game and held a sold-out show at the Bloomsbury Theatre at University College London. The atmosphere was less intimate but it meant that the hijinks could be more dangerous. If you read this as, "They set a lot of stuff on fire", you would be correct. One of their blazing hijinks consisted of a tube about a metre long filled with a butane-air mixture. One end of the tube was sealed with a flexible membrane. There was a row of evenly spaced pinholes along the length of the tube through which the butane could escape and be set on fire (because what else do you do with butane?). When a speaker is placed on the end with the membrane and the noise is tuned to a resonant frequency of the tube, you get a standing flame-wave. 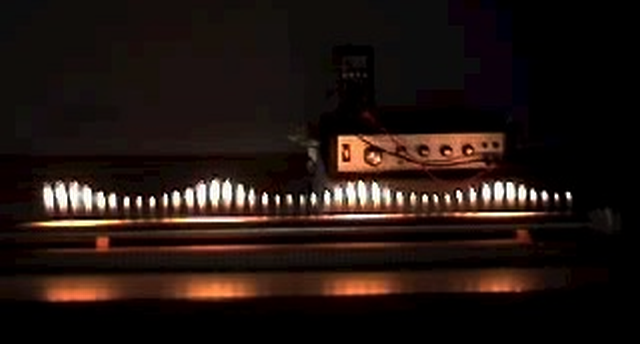 [Image of a Rubens flame tube in a standing wave configuration.]

Now, a flame-tube on its own is impressive, but FotSN decided this wasn't good enough. So they brought on Vid Warren, aka The Human Beatbox, to play it. And Vid Warren, even without flame-tube accompaniment, is pretty awesome, what with managing to sound like an entire percussion section using only his mouth. Hence, he's the star of the week's Music Monday.

* I say this because there have been no less than three separate occasions on which my spacecraft has demanded that I stay at work to care for it rather than attend FotSN. IT KNOWS.
Collapse