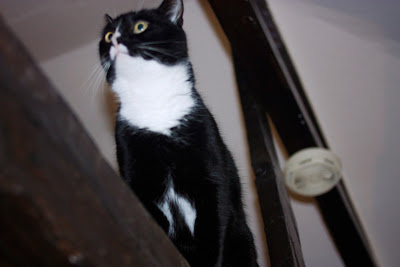 HELLO. I am CRAZED SPUTNIK. I have been fed many, many catnip-based treats by my overly enthusiastic bipedal niece and nephew. I think they were trying to win my affections. But then one of my usual bipeds SWITCHED ON A LIGHT. And it made SHADOWS ON THE CEILING. And I MUST CATCH THEM HO YES.

Bipeds? WHY YOU LEAVE? Ungrateful bipeds will be punished. PUNISHED I TELL YOU.

(Concerned viewers will be pleased to know that Sputnik managed a most spectacular leap from the top rafter to the bed of his own accord. After such an exhausting escapade, immediate napping was required.)

To reach the Egyptian Revivalist entrance to Abney Park, exit Stoke Newington overground station, turn right and walk 200 metres. Then brace yourself, because the inside's an absolute stunner. You'll have the choice of two paths. Pick the left if you want to withhold yourself from the immediate pleasure of discovering its centrepiece: the disused nonconformist gothic chapel designed by William Hosking. It fully compensates for the rather unattractive entrance, which he also designed. All the windows are shattered, with little fragments of coloured glass clinging to the frames, but otherwise it's in remarkably good condition.

Certain of my friends will be interested to learn that Abney Park was Europe's first fully nondenominational cemetery, which goes some way to explain the wildly divergent styles of grave markers evidenced here. Certain other friends will be interested to know that parts of Amy Winehouse's Back to Black video were filmed in the park. You can see the chapel behind her repeatedly in the burial scene. 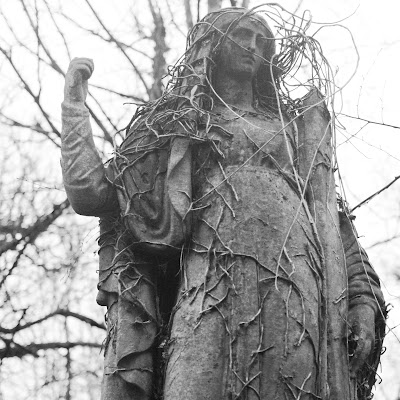