alwayswondered, an impulsive resolution was born to visit all of the Magnificent Seven cemeteries in London. I've been to three of them previously (Highgate, Brompton and Kensal Green), but I never pass up an excuse to visit a cemetery. 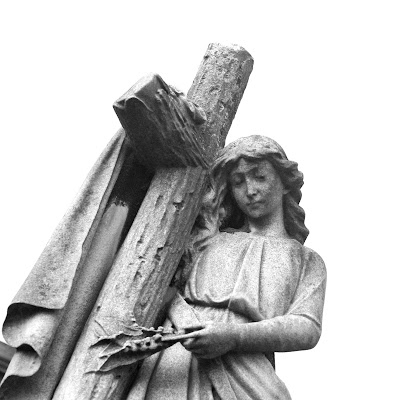 Since I work quite close to it, it was no trouble to dash quickly down to Brompton Cemetery on my lunch hour. (I would have liked to stick to public-transport-or-walking rule when it comes to these projects, but to keep the venture within my time limits, I had to cab it from Imperial.) My favourite grave markers are humanoid statues and Brompton Cemetery is awash in them. There's an imitation-classical circular section surrounded by columns and featuring a rotunda reached by a wide promenade in which an entire host of angels is encamped. I snapped until my fingers stopped functioning in the biting wind.

As it turns out, my Kindle helps me to engage in arguments that I would previously have avoided like the plague. For instance, I was out with four friends last night at a pub, and someone brought up Joseph Conrad's Heart of Darkness. I don't remember what the conversation was originally about, but suddenly he uttered the phrase, "...it's not racist."

Now, normally this is the point at which I'd look round at my four white friends, who were clearly ready to prepared to let this pass without mention, and I'd drop it myself. I find it tiresome to be the one non-white person calling something racist and being talked down by a bunch of white people who are uncomfortable with the conversation and would rather be arguing about whose round of drinks it is. But I've actually read Heart of Darkness fairly recently on my Kindle. And what's more, I'd made a point of underlining certain passages that allowed me to state with certainty, "Yes, it is."

Then he started in with the "but it's a great piece of literature", "you can't judge it because of the prevailing attitudes in the time in which it was written" and "the definition of racism has changed over time" arguments. I patiently refuted the first - I was absolutely not saying that Heart of Darkness isn't a worthy piece of literature. It is. That doesn't mean it's not racist. As for the second, I can absolutely judge it to be racist no matter when it was written, because of the incorrectness of the third statement. Racism is discrimination against another person based on their race. It's really very simple. While Heart of Darkness certainly criticizes colonialism and discrimination in a passionate manner, the language used in many passages is racist.

So I took a deep breath and walked away from the group to go to the toilet. After using that noble facility for the purpose for which it was designed, I got out my Kindle and flipped through to "My Clippings". Then I walked back outside and read out the following passage (emphasis mine):

Imagine him here - the very end of the world, a sea the colour of lead, a sky the colour of smoke, a king of ship as rigid as a concertina - and going up this river with stores, or orders, or what you like. Sandbanks, marshes, forests, savages, - precious little to eat fit for a civilized man, nothing but Thames water to drink.

Trying to argue that it isn't racist to call the people of a country "savages" while referring to yourself as a "civilized man" is futile, which he eventually conceded. But damn, I really love my Kindle for giving me the armoury to tackle a conversation I would otherwise have been unwilling to have.

By the way, if you're wondering about racism, may I point you at this Tumblr: Yo, is this racist? (With snaps to

ajnabieh.) My favourite entry is this one.
Collapse