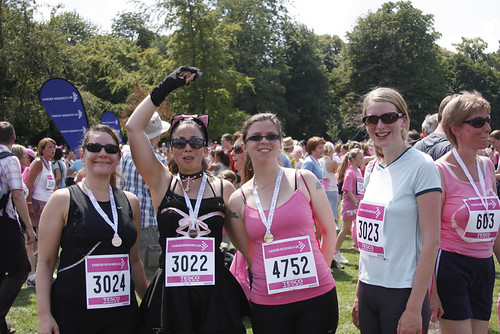 This weekend, I ran the Cambridge 5k Race for Life, which raises funds for cancer research, with three of my lady friends.

A few months ago I posted to

runners asking how to keep a group together during a race. It turns out to be fairly simple to organise - ask who wishes to be in the group first! We ended up running as 3+1, with three of us paced similarly (running continuously) while the fourth ran alone (in intervals) partly from personal preference and partly from necessity due to injury.

We arrived at Parkers Piece, where the race began, about half an hour early. I left the house feeling rather self-conscious in my kitteh outfit. We rounded a corner onto a busy road and were faced with two angels, three fairies, a bunny and a chicken. My self-consciousness evaporated.

On reaching the green, we were blinded by pink. Thousands of girls and women in pink. Seven and a half thousand, according to the official tally. We marveled at matching mothers and daughters, at tutus, at feathered head-dresses. Then we tried to place ourselves in the correct corral for the start of the race. We opted for what we thought was the "runners" corral, but ended up going through in the first pulse of 1000 participants, amongst the "serious runners". This turned out to be a stroke of good luck, as due to the congestion we had to pretty much walk the first 500 metres.

The field opened out after that and my companions H & M and I took off. We started passing people. In fact, we spent most of the race passing people. At one point, M, who has a weak ankle, took a tumble to a chorus of "Ooohs". She rolled (hello, self-defense training) and was on her feet in the next instant, to a chorus of "Yaaaays". We threaded through the crowds as one kilometre after another melted away. Spectators cheered us on. I received many compliments on my costume. Each gave me a little extra burst of energy. We kept up our banter for almost 4k. Just before the marker, we saw H's husband and son. Her husband cheered. The baby snoozed obliviously.

As we rounded onto Jesus Green for the last 500 metres, we started going faster by unspoken agreement. There was more space, so we could push ourselves harder. Chatting stopped abruptly. H, who is the fastest, silently egged us on, incrementally increasing her pace until with fists raised and adrenaline pumping, we bounced across the finish, 31:24 after we'd started.

I figure we probably could have done it in under 30 minutes if it weren't for the early congestion and a couple of bottlenecks that slowed us down. For a first attempt at keeping a group together and for what was really a fun run (no timing chips involved), I feel pretty happy about the performance. It would have been impossible for us to train together as M normally lives across an ocean. K, the friend who did intervals, finished in just over 35 minutes. I'm also pleased because I never thought that running would be a form of exercise that I would enjoy quite so much. I don't have a "natural" runner's build, as you can see from the pictures under the cut, and I'll never be a placing competitor, but the fantastic atmosphere and energy of races is well worth the training.

Also, I was pleased because my kitty ears stayed on the whole way.

I've now done a 5k adventure race and a straight 5k. The next step up for me is a 10k in October!

runners: Apologies to those for whom this is turning up twice.
Collapse